Looking for a new way to get ahead of the competition this holiday season?
Well, you have come to the right place!

On November 11, known in China as Singles Day, marketplaces e.g. Alibaba recorded $25.3 billion in gross merchandise volume. Sellers reached the accumulative of $1 billion marks within an astounding two minutes.
Similar to other shopping holidays around the globe, for instance, Boxing Day and Black Friday, people look forward to 11/11 the whole year so they can purchase from the sales. This is evident in social media users’ online behaviour e.g. frequent 11/11 hashtags on Weibo (Chinese Twitter).. The annual event kicks off on the midnight of 11 November and runs for 24 hours featuring steep discounts that are driven by the main Alibaba-owned platform, Tmall and other online platforms e.g. JD and Taobao. Offline retailers also look forward to the date and start preparing for the sales to receive happy shoppers. Usually, the preparations and sales start to peak up from late October and everyone is involved! Sellers and shoppers.

Now that’s a shopping holiday your business has to participate in.

What exactly is Singles Day?

Started by students in China, Singles Day was established in the 90s as a method of celebrating freedom and singledom on the symbolic date 11/11, it was the anti-valentines day.
As Singles Day grew in popularity, Alibaba capitalized on the day’s potential by trademarking the name and turning it into an online discount shopping event in 2009 with only 27 participants.
Last year, In 2017, 140,000 sellers listed 15 million products and processed 812 million orders — all within a 24-hour period.

On Singles’ Day 2017, Alibaba set a world record for most payment transactions during the festival, higher than Paypal. Its mobile wallet app Alipay processed 256,000 payment transactions per second. A total of 1.48 billion transactions were processed by Alipay in the entire 24 hours, with delivery orders through Cainiao (Alibaba’s logistics affiliate) reaching close to 700 million, breaking the previous record set in 2016. The event is now nearly four times the size of America’s biggest shopping days, Black Friday and Cyber Monday.

Although double 11 2017 broke various sales records, it does not stop there. In 2018, more records were broken and Singles Day surprised the global market one more time..

The event got off to a strong start with sales hitting $1 billion in one minute and 25 seconds. Just over an hour in, and sales exceeded $10 billion, five minutes and 21 seconds faster than last year. The number of delivery orders surpassed a billion.

Do foreign brands get involved in 11/11?

In case you didn’t know, China’s Singles Day is not just for Chinese retailers. More than 40% of last year’s sellers came from outside China, with many US brands among the day’s best-selling. Forty-seven million users purchased international brands, led by U.S. brands according to L2 data, and 82% of the sales were made via mobile devices.
Western companies such as designer brand Burberry, Starbucks, Apple and Nike participate in 11/11 and have made great profits.
For example, Starbucks Corp. SBUX, +9.70% seized the opportunity to get into the Singles Day festivities, offering a Cocoa-Java Mocha beverage exclusively for the day at locations across China. The company also sold gift sets, exclusively-designed gift cards, and limited-edition My Starbucks Rewards Cards 11/11.

Double 11 was a hit for the foreign brands that Up2China cooperates with too!

CuraLife – a global well-being company formed to help individuals fight against chronic illnesses such as diabetes, asthma, cholesterol, etc.
Up2China developed a successful cross-border e-commerce solution to help CuraLife reach the Chinese consumer directly. During double 11 Singles Day, CuraLife sold more than double the amount of bottles they sell in one month and sold most of it in almost one minute. Another brand that up2China cooperates with is the beauty brand Sensica which had a huge amount of products sold in one day due to their sales prices which reduced from 3688 CNY to 2888 CNY. 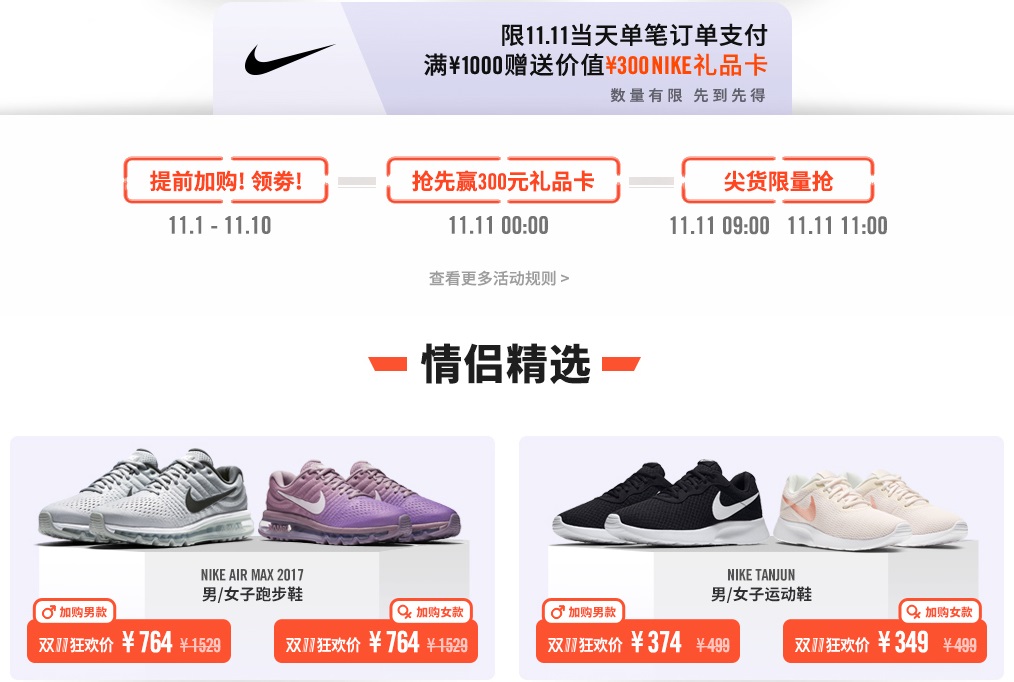 An example of the Nike sales on TMall 2018

Looking forward to next year’s Singles Day? Start planning already and stay ahead of the game, it is never too early to plan your business strategies.